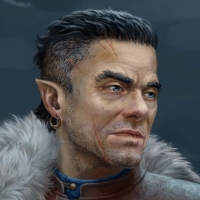 These are the stories on board the USS Centaur. These stories contain the adventures of one particular individual and his friends, who will embark on all sorts of missions, simple or tedious, complicated or difficult, and maybe even weird or bizarre. Their adventures may proceed later on to another vessel in some distant future, but at this time, this is where they are and on board this small vessel, they have to not only learn to live in the confines of others but also keep the ship well oiled and finely tuned.

These are the Continuing Adventures of Vakai...