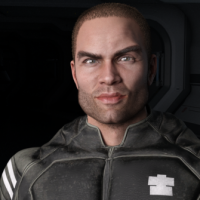 After five days, it was over.

Raan filed out of the conference hall with mixed feelings: a strange sense of relief that the briefings were over, and a sense of disappointment that they were. The Initiative had been an odd little world of its own, of new faces and friendships forged over a small period of time, and calls to duty as they were asked to make decisions that would impact their careers for years to come. In a way, he didn’t want to leave, and couldn’t wait to leave to start this new phase of his life. It was… confusing. Frustrating. Exhilarating. All at the same time.

His padd pinged him and he looked down to see new orders. He was to report to Docking Precinct A, for the SS Minnow, leaving at 1700. No mention of his assignment yet.

The crush of the crowd leaving the conference room forced him to look up and he instantly spotted a familiar figure by the back door of the corridor. Blue hair like a flag that flowed over her shoulders… Blue hair spread over a pillow. She spotted him and smiled. He was already cutting through the crowd toward her before she waved him over.

“Hey,” he kept his voice soft as he came to stand next to her. “Did they let you go now? Or do you have other meetings before you leave?”