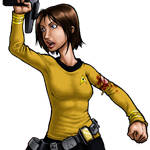 The USS Endeavour has spent the last three years defying her nature. A Manticore-class starship under the command of veteran captain and explorer Leo MacCallister, she made her reputation pushing the boundaries of what duties a heavy escort can perform. Operating at the fringes of the Raeyan Sector, Captain MacCallister turned border patrols into survey missions, threat response into diplomatic overtures, disaster response into humanitarian support. In an era where Starfleet cared more to watch its own backs, Endeavour strove to turn a vessel designed for battle into a bringer of peace.

But battle has come nevertheless. A routine mission has been disrupted by a distress call. A distress call has led to a fight with unexpectedly vicious pirates within Federation borders. And the fight has caused the death or incapacitation of many of the crew, including Captain MacCallister himself. Border worlds once thought safe and secure have been freely marauded by a pirate gang under Federation noses, and only Starfleet deaths are bringing a Starfleet response.

And so Endeavour has a new mission: to find those responsible, and bring justice to these fringes of Federation space. A new commander and many new crew have been assigned, not all of whom share MacCallister's visions of keeping to Starfleet's most peaceful and laudable principles in this most vicious death of a century. Those who remain bear the scars of their losses, and face the greatest challenges of their careers.

Those challenges are more numerous than a mere pirate hunt. Renegade Starfleet officers threaten the organisation's integrity and turn their training against those who were once their own. Border colonies, feeling the sting of Starfleet's neglect for long years, strain for their own independence as the fringe looks after its own. The rogue Klingon House of Mo'Kai smell this weakness as blood in the water, coiling to strike.

And someone, somewhere, is pulling the strings and exploiting the chaos it brings for their own, mysterious goals...